I decided to take a day off work this past Monday, and go explore somewhere I have driven by countless times on Interstate 35 – Bell County. I checked out four places while there – Fort Hood, Killeen, Belton, and Temple.

My first stop was at one of the world’s largest military bases – Fort Hood. In use by the US Army since 1942, it is home to many units like the III Corps and the First Cavalry Division. Having never been on a military installation before, I was excited to gain some perspective about how life is on one, and check out the museums. Before I could do that though, I had to stop at the Visitor Control Center to get my access pass.

Getting the pass was pretty easy. Upon entering, I took a number, and almost immediately was called up to the counter. I presented the military police officer with my driver’s license, proof of insurance, and a photo of my vehicle’s registration sticker. He inputted everything into the computer and told me to take a seat while they ran a nationwide background check on me.

As expected, everything came back clear, and I was issued my pass. I asked the MP if I could explore the base after getting done with the museum, to which he said I could as long as I don’t drive into any areas marked “No POVs” (privately owned vehicles). On the subject of photography, he said that it is a gray area and that I would be drawing a lot of attention should I snap photos anywhere else than on the museum grounds. Noted!

Armed with my pass, I approached the main gate checkpoint. The guard checked my pass and my driver’s license, and I was sent on my way.

Once in, my main destination was the 1st Cavalry Division Museum, which displays artifacts from one of the most famous military units in American history. Admission is free. 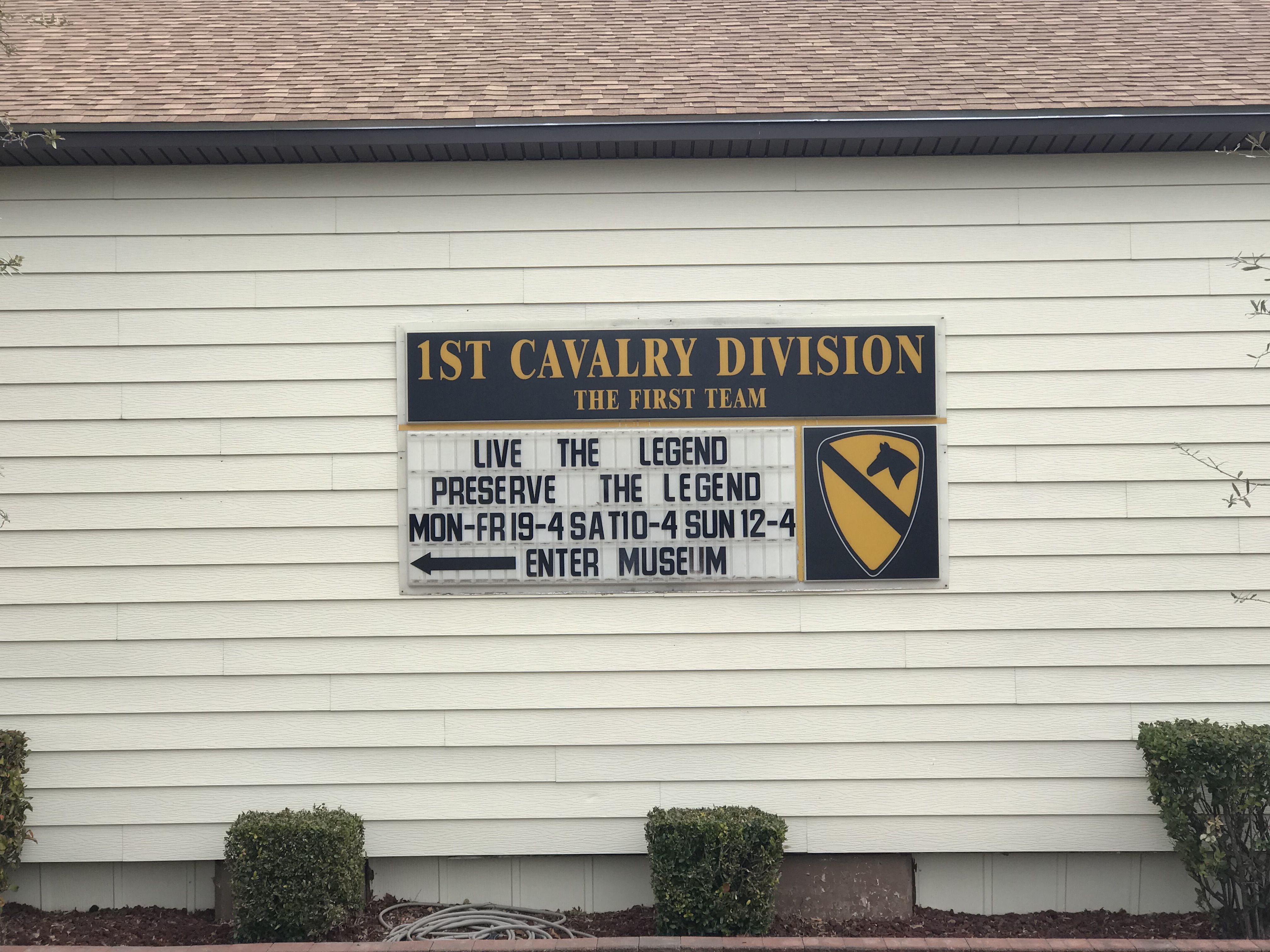 The First Team has been around close to 100 years, with two battalions that trace their history back to the days of the Civil War! The exhibit starts off by talking about the early days of the horseback cavalry units, and the roles they played in the Civil and Indian wars.

Upon formal activation of the division in 1921, troopers rode on horseback patrolling the Mexican border until war broke out in the early part of the 40s. World War II was the first major conflict that the 1st Cavalry served in. Participating in the Pacific Theater, they were eventually the first unit to enter Tokyo in 1945. They occupied Japan for five years, assisting and monitoring the demilitarization effort.

Following WWII, the First Team participated in the Korean War. Everything from the start of the conflict to the eventual Armistice Agreement on the 38th parallel was mentioned.

The Vietnam War was covered next. One of the nation’s most controversial wars, I gained a new perspective beyond the usual YouTube documentaries. The displays talked in depth about the various battles, and how helicopters played a super crucial role in both supply delivery and medical evacuation of wounded soldiers.

After the section on Vietnam, I learned about the last few conflicts of the 20th century that the 1st Cavalry took part in, including the Gulf War and the peacekeeping missions in Bosnia and Herzegovina. The first half of the museum exhibit ended there.

I stopped briefly at the gift shop to pick up a postcard before heading to the other side of the museum, which talks about the 1st Cavalry’s involvement in the War on Terror. This section is the one I can relate to the most, having been around when 9/11 struck and the invasion of Iraq took place. Good dioramas and descriptions talk about the US involvement, OEF/OIF, and the effort to train the Iraqi Army to secure their own country. 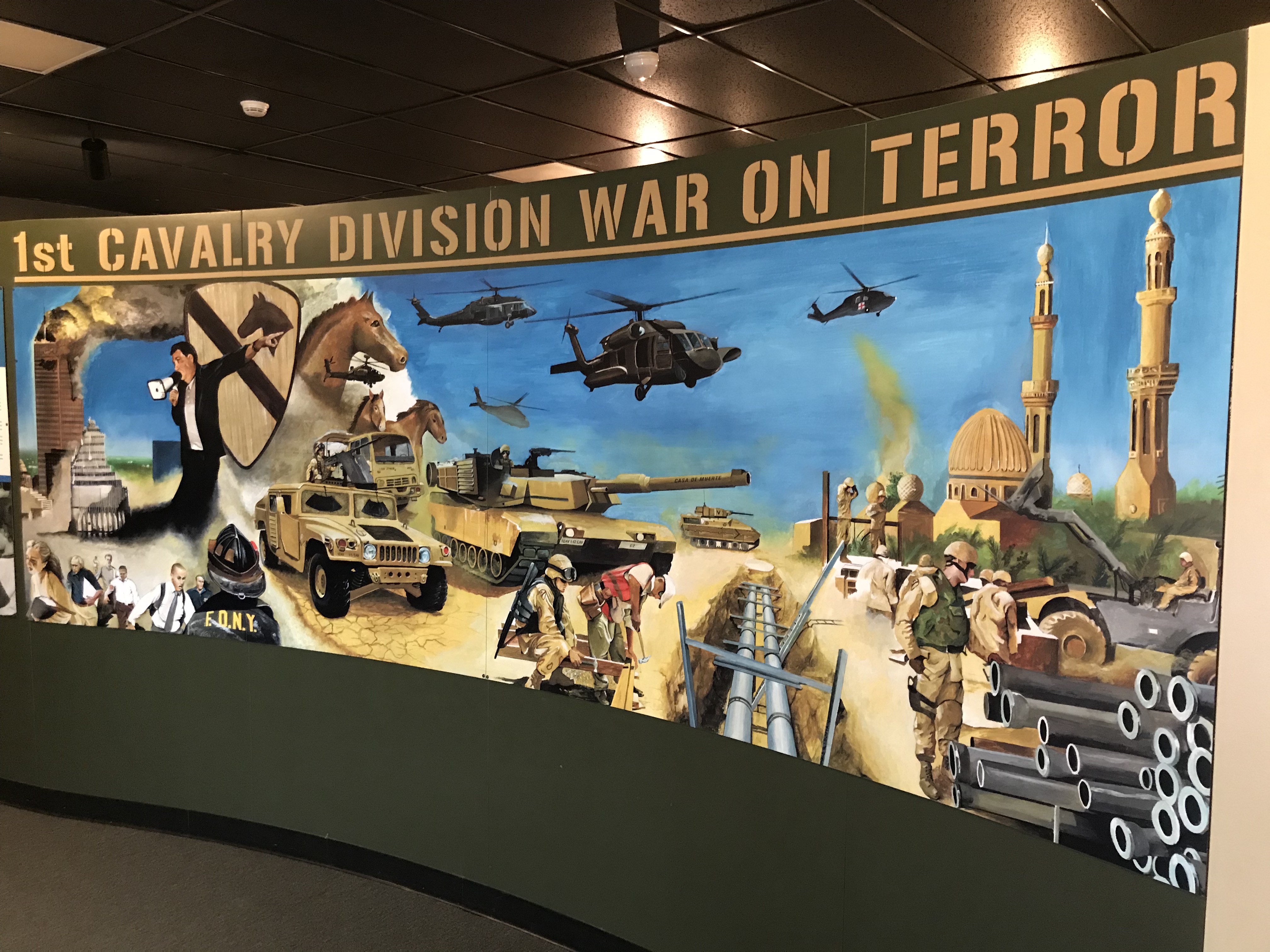 After getting done there, I checked out the exterior of the museum, where they have static displays of the various tanks, helicopters, and other motorized equipment used by America’s First Team. It was pretty cool seeing an Apache helicopter and an M1 tank up close and personal!

After leaving the museum, I drove up one of the longest roads on base: Old Ironsides Avenue. This one-way street spans close to the length of the base, and runs west to east. This gave me a great opportunity to check out the different divisions and offices. After reaching the easternmost terminus, I turned around and went down Hell on Wheels Avenue, which runs parallel to Old Ironsides except in the other direction. On the right, I could see the motor pool where most of the military vehicles are kept. (Thanks Specialist Bugg for giving me this tip!)

After all that, I was pretty hungry. I decided to stop at the main PX of the base, off on the west side by Clear Creek Road. Having never been to a PX in the United States before, I didn’t really know what to expect. I was quite surprised. The place is humongous, and contains a full-service store that sells everything from clothing to electronics, and even firearms. In addition, a mall-style food court is there, which was quite busy even at around 1 PM. There were everyday joints like Boston Market, Subway, and a Chinese place. I decided to refuel with some Boston Market sides.

After lunch, I departed Fort Hood to see the nearby city of Killeen. The place I elected to check out was the Luby’s massacre memorial, located at the Killeen Community Center.

For those of y’all that don’t know, in 1991 there was a mass shooting at a Luby’s Cafeteria in town. A man drove his pickup truck into the restaurant, and as people came to his aid, shot at them with two 9mm pistols. 24 people died on that horrible day, with 27 more sustaining injuries. One of the customers, Suzanna Hupp, was in there with her parents that day having lunch. She left her revolver in her car, because at the time it was illegal to carry a handgun in a public place. Later, she testified that had she been allowed to carry, her parents would probably have survived. This event really put the Concealed Handgun Law legislation front and center, with Governor George W. Bush signing it in 1995.

I also stopped by the location where the shooting took place. It has now been turned into a Chinese buffet.

After that, I headed for Belton, the county seat of Bell County. Two points of interest were on my radar – the downtown square/courthouse, and the University of Mary Hardin- Baylor.

When I followed Apple Maps to the Bell County Courthouse, it actually took me to the District Clerk’s office and county jail. Seeing this fairly new building come up in view, I knew this wasn’t what I was looking for. They would be smarter than to demolish their historic buildings, I thought. Switched over to Google Maps, and found it in short order. That’s one thing I noticed on this trip – Apple Maps sucks when it comes to Bell County! I had at least three times where it either couldn’t find the place I wanted to go, or gave inaccurate directions.

The courthouse had the customary practice of being in the middle of the downtown square, and was quite nice.  I liked the architecture, as it was pretty sophisticated, yet elegant. Texas counties do a great job with their courthouses, and this was no exception.

After checking out the courthouse, I went to visit the University of Mary Hardin-Baylor. Although this university has been around since 1845, the buildings looked very new. There were plenty of students walking around on a Monday afternoon. I then came upon their football stadium. For a smaller school like this, I thought it was pretty well designed.

Upon getting done touring UMHB, I headed for my last city- Temple. Most people know Temple as just a small town off IH-35, but it also has a rich history as a stop on the Santa Fe Railway. After driving thru the downtown area, I went to the Temple Railroad Museum. Located in the same building as an operating Amtrak station, the museum was closed that day. It was pretty cool how people can look at both historical trains and watch the activity in the rail yard from Amtrak and BNSF operations.

Standing there, I could imagine how busy this station was during its heyday. I walked into the Amtrak station just to look around, and it was pretty dead. A few rows of seats allowed you to relax while awaiting your train.

Finishing up there, I started to head home. It was a very relaxing and educational trip, and I saw a lot of stuff I wouldn’t have otherwise seen had I just stopped at Buc-ee’s. Visiting a military base was an itch that I had wanted to scratch for a while now, and seeing the community that thrives around this big installation was very unique. All of these small Texas counties are packed full of history, especially Bell County!

Learn About Big D’s Bravest at the Dallas Firefighters Museum