The Twin Cities of the South

Sunday, the family and I went on a road trip to see what could possibly be one of the more interesting cities in the state – Texarkana, located along the Texas-Arkansas border. This trip had been in the works for a while – being that my mother finally had time to come along after the tax season rush presented this weekend as a great opportunity to do a mini getaway.

Located about 180 miles to the northeast of Dallas, Texarkana has one unique layout. The western half of the city is in the Lone Star State, while the eastern half is in the Natural State. There is Texarkana, TX, and Texarkana, AR, both with their own individual city governments, police departments, and school districts. The Texas portion is part of Bowie County, while the Arkansas portion resides in Miller County. Combined population of both cities is close to 143,500 people.

The drive on Interstate 30 took about three hours. Since it was a Sunday morning, traffic was light. Before we knew it, we had arrived in “The Twin Cities of the South”. Since we had limited time, we dove right in!

The first place we checked out was the U.S. Post Office and Federal Courthouse, on State Line Avenue. Not just any ole’ federal building, this is the only one of its kind to straddle state lines. Built in 1933, the base is made from Texas pink granite while the limestone walls come from Arkansas.

Although the place wasn’t open today, there was the “Photographer’s Island”, a marker that depicted the state line right in front of the building. It made for a great photo op, and I saw quite a few people taking selfies with one leg in each state.

Upon getting my touristy photo taken, we walked down State Line Avenue, when we accidentally came upon our next point of interest, the abandoned Hotel Grim. Once I saw it in person, I knew that they couldn’t have chosen a better name for the place. It’s as if though someone predicted the condition the building would be in today.

Located on the Texas side of the street, this now grim looking structure was built in 1925. It contains 8 stories, and was quite popular back in the 30s and 40s. According to some quick Google research I did, the hotel featured a restaurant, barber shop, drug store, and even a rooftop garden that could be used for ballroom duty. Now it just stands there, a reminder of a bygone era. The door behind the locked grille happened to be open, and I was able to peek in thru the grille. Although there was graffiti and trash everywhere, I could see the lobby and second floor, and was able to imagine how busy it must have been when it was open.

In spite of me seeing a sign advertising a redevelopment of Grim as luxury apartments, there were no signs that construction had begun or was about to begin. Broken windows dotted the building, and water leaked from open windows as we walked around the structure.

Leaving there, we were all getting a bit hungry, so we decided to stop for lunch. We quickly decided on Joe’s Italian, located right across from the post office on the Arkansas side of the street. Many folks were seen entering, so we figured it would be pretty decent food.

Turned out that decent didn’t do it justice at all! I ordered their fettuccine alfredo, and while it was delicious, the rolls were the best I have indulged in to date anywhere! Before I ate here, my top award went to the breadsticks of Fazoli’s Italian, but Joe’s is even more delicious. They aren’t dry like what is found at Olive Garden, and not too oily, like at Fazoli’s. Ended up getting 4 refills. 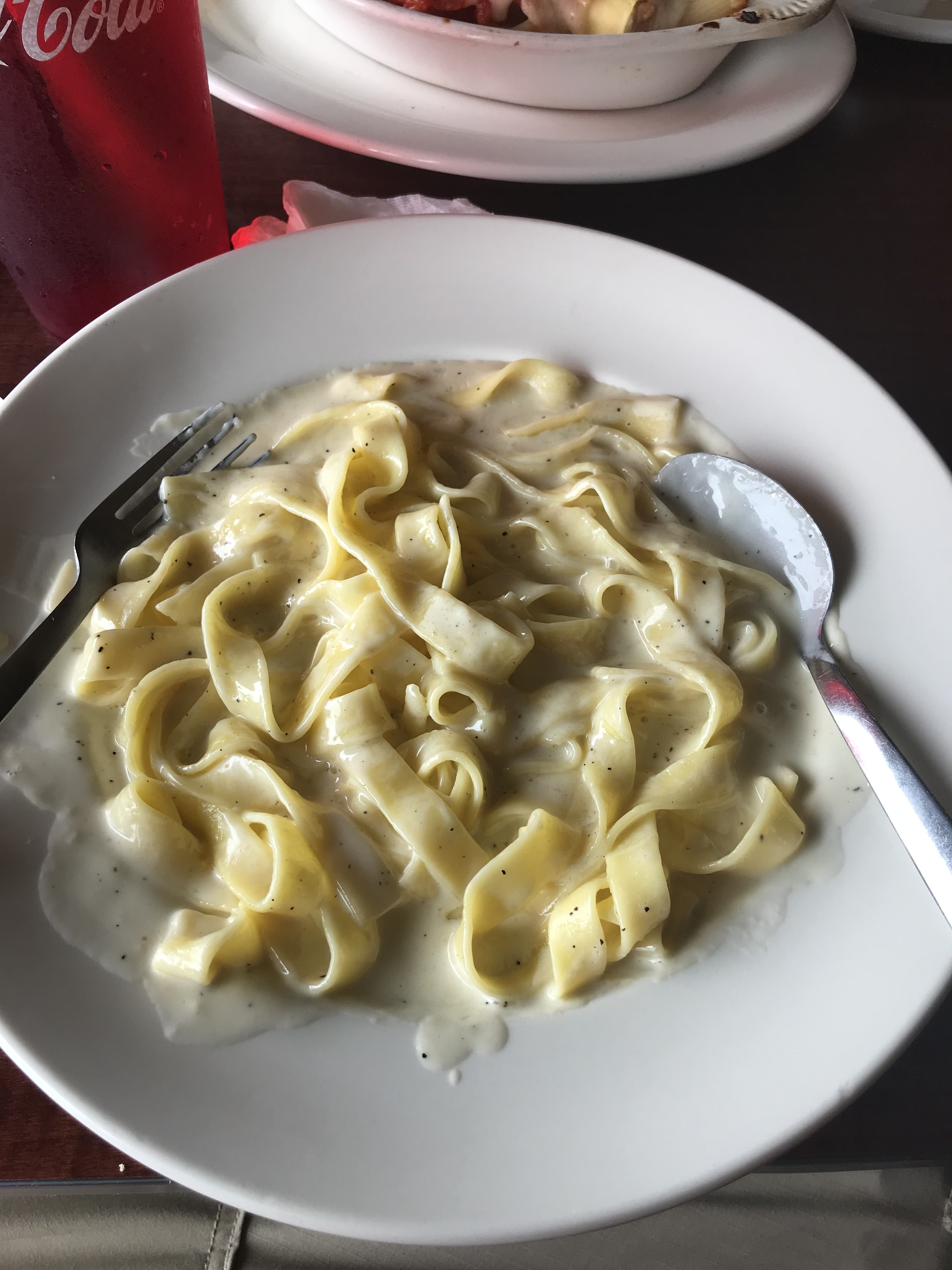 After getting stuffed, we drove around the downtown area, and explored the various streets that made up their city center. Judging from all the places I’ve visited, I’d say Texarkana has a pretty decent downtown. The streets are well maintained and there aren’t many up slopes and down slopes, like what was seen in Tyler. Makes the drive that much more pleasant. We saw Union Station, another abandoned hotel, and two jails. If there’s anything that’s missing though, it’s people. There wasn’t anybody to be seen once we left the post office/photographer’s island area.

The next stop was the Texarkana Regional Airport. Usually, this would be the first and last place I would be at if I flew in, but since we did a road trip it was just a normal point of interest. Never landed here(yet), but it just might happen one of these days on a Joe’s Italian lunch run!

Having two runways, this airport is serviced by American Eagle with nonstop flights to DFW Airport. Like most small town airports, the terminal was pretty quiet when we walked in, probably because the next flight out didn’t leave until around 6 in the evening. There was just one baggage carousel, and one mini TSA checkpoint.

One thing this place doesn’t have is modern decor. The furniture didn’t seem to be quite in the year 2018, and last I checked Continental Airlines has been out of business for quite a few years!

Even the control tower didn’t look too modern. That being said, looks are just one thing. As long as the guys up there are able to do their jobs and have working equipment in a comfortable environment, there isn’t too much that can be asked for.

After leaving the airport, the final place we checked out was Texarkana College, a two-year community college located on the Texas side of town. This college opened in 1927, and is the alma mater of billionaire Ross Perot. The main purpose of us visiting was to see the Perot Leadership Museum, an exhibit in the library’s common area that talked about the life of Perot and his contributions to the community.

Born in Texarkana, Perot attended college here before heading to the U.S. Naval Academy. When he was about to get discharged from the Navy, he met an employee of IBM and went to work there. He had tons of ideas during his tenure at IBM, many of which got ignored by superiors. Perot took a leap of faith and started his own company, which eventually became one of the most known in the world.

Perot also ran for President of the United States back in the 90s, and the exhibit talked about his campaign, and how as a third party he was able to secure an impressive amount of votes.

The exhibit took us about 15 minutes to look over, but it was presented in a way that was informative yet not dry. For someone that didn’t know too much about Ross Perot prior, I was able to gain quite a bit of information about his life and the work that he did.

Since we were already on campus, we also walked around. The buildings of Texarkana College are not modern by any means, but they seem to be pretty well maintained judging by the exterior. We strolled by the health occupations and science buildings, and peeking in they kind of resembled a high school hallway more so than a college. The classrooms were pretty tightly spaced between each other.

Upon getting done there, we headed back to Dallas. Traffic was light so we made it back in less than three hours. This was a pretty fun and cool trip, in part since I hadn’t done a road trip to the Texas-Arkansas border in over ten years. Flew over the city on my way to Memphis last summer, but never landed to explore this one of a kind place. I plan to be back in the East Texas area soon, to check out Nacogdoches and Stephen F. Austin University!

2 thoughts on “The Twin Cities of the South”

The Land of the Lumberjacks

A Saturday Afternoon in Athens(Not Athens,Greece)

A Day Spent in Tyler