So I decided to stay in town this past weekend. As I was thinking of where I could go visit, my mind suddenly thought of places surrounding the event that Dallas is most well known for – the assassination of President John F. Kennedy. I knew about Dealey Plaza, having driven past there quite a few times, but still decided to do some research before heading out. As I was browsing around, TripAdvisor also pointed me to the JFK Memorial, just up the road from the assassination site. Having never been there, I knew I wanted to pay a visit. Thinking back, it has been a while since I’ve been to the downtown Dallas area – about three months in fact.

I decided to skip the drive and ride public transportation instead, as I often do when going to downtown. Not only is parking potentially expensive, you gotta walk either way, so why not.  After boarding the DART green line train from the downtown Carrollton station, I found out that due to construction there would be no green line service into the downtown stations. Looked at the map and decided to disembark at the Inwood/Love Field station, and take the Orange Line into downtown. The Orange line runs from Parker Road in Plano all the way to DFW Airport, with many stops in the downtown area.

After getting off at the West End station, the walk to the JFK memorial was only about 5 minutes. On the way there, I passed by El Centro College, the site where 5 police officers were killed in the summer of 2016. A poster could be seen hanging from the balcony of a business commemorating the event.

Upon reaching it, I was immediately intrigued by its unique design. Built in the 70s, the JFK memorial is right across the street from the George Allen Courts Building, containing the civil and family courts of Dallas County.

My initial thought was that the opening was created in the middle to symbolize an open atmosphere, the free flowing of ideas, and an everlasting remembrance to our 35th president. The slab of granite placed in the middle was black to symbolize that dark day. After reading the display, I realized I wasn’t too far off. 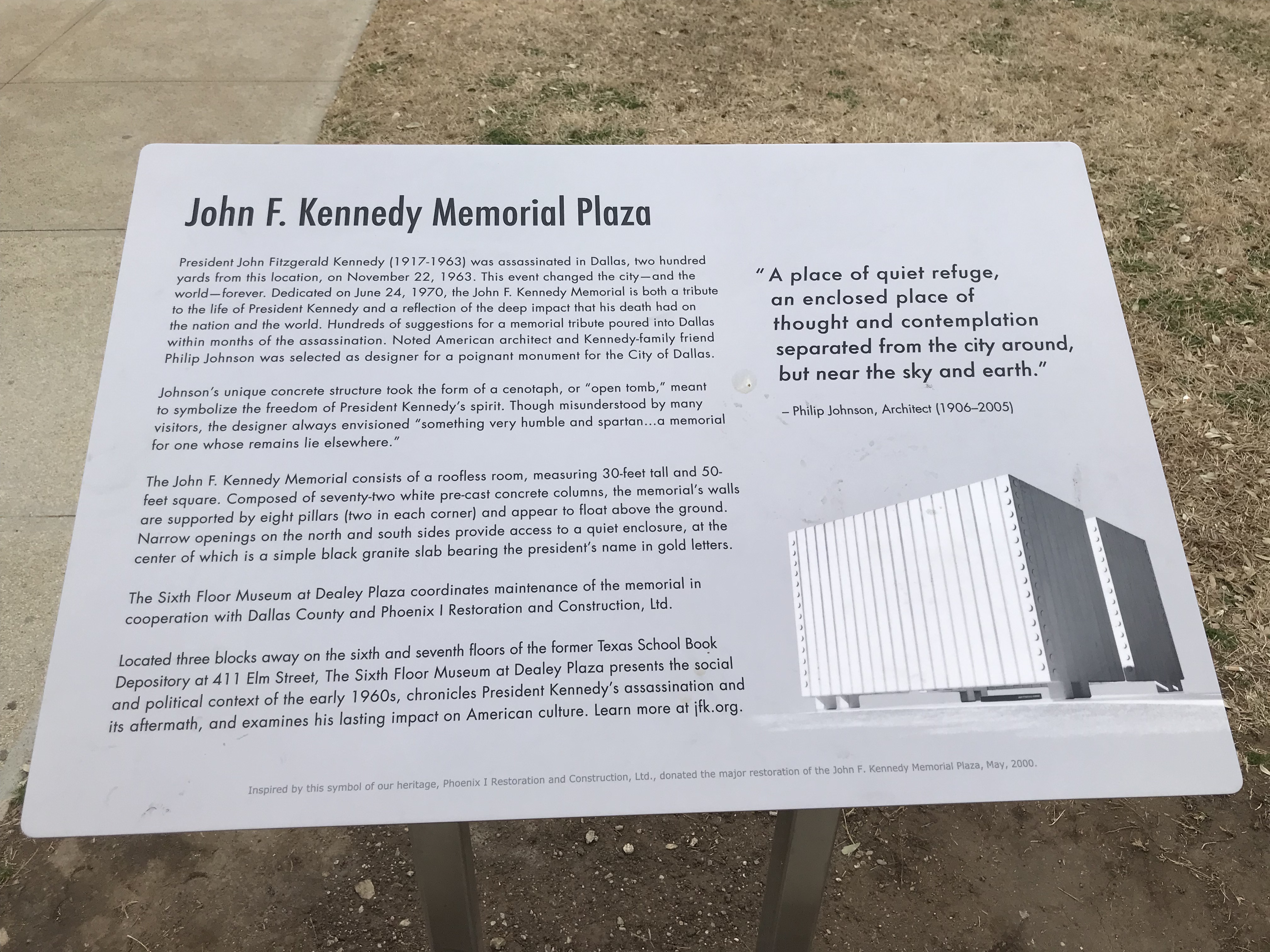 In actuality, the opening is meant to symbolize the freedom of JFK’s spirit. The entire structure is 30 feet tall and 50 feet square. Supported by eight pillars, the memorial appears to float above the ground. Dealey Plaza only lay 200 feet away. Plenty of folks were here on this cloudy morning taking photos and looking around.

I then crossed Houston Street to get to Dealey Plaza. This was the site where President Kennedy’s motorcade was traveling through as gunshots rang out, hitting him and the Texas Governor. The City of Dallas has kept this area just like it looked in 1963.

The grassy knoll area, off to the right, was the subject of much discussion when the FBI was investigating Kennedy’s death. Quite a few witnesses reported hearing shots being fired from that direction. The official explanation is that as the motorcade turned on Elm Street, Lee Harvey Oswald fired a shot from the Texas School Book Depository building. Many conspiracy theories exist as to who really killed Kennedy and from where, and I’m sure it won’t be an issue that gets settled anytime soon.

As I was looking at the Texas School Book Depository Building, and its proximity to the X, I realized the distance was much shorter than I initially thought.

That tragic day put Dallas on the world map, and I was very glad I got to see both places that cover this important piece of history. Regardless of political affiliation, this site is worth seeing..even if it is just to debunk all those conspiracy theories!

2 thoughts on “Being a Tourist in my own City(sorta)”

Behind the Scenes of DART Light Rail