Paying the Feds a Visit!

“Where is a cool place to check out?”, I thought to myself as I was planning out my itinerary for Spring Break a few weeks ago. I browsed around the Internet to see what was interesting and worth seeing here in the Dallas area. Came upon the website of the Federal Reserve Bank of Dallas, and saw that they had an exhibit open to the public. Sounded like it would be pretty worthwhile, even if it was just to see what the building looked like on the inside.

As I do most times when heading to the downtown area, I took the DART light rail train. Doesn’t really make much sense to circle around for 20 minutes just to find some expensive, not to mention sketchy garage to park at! The Green Line trip from the Downtown Carrollton station to the Pearl/Arts District station took just over 40 minutes.  Upon disembarking, I was only about 7-8 minutes walking distance away from the Dallas Fed, right on the other side of Woodall Rodgers Freeway.

Upon entering, the first thing I noticed were the tight security measures in place. There were cameras everywhere, and not much of a lobby except for the security screening area. I went up to the access desk and told them that I was here for the exhibit. They took my ID (presumably to run a background check), handed me a sticker and then sent me on my way to the security checkpoint.

Once at the checkpoint, I had to remove all metallic objects from my pocket and place them on the x-ray machine. I then stepped thru a metal detector, much like what goes on at the airport. What was unlike the airport though, was what happened next. I then was told to walk into a portal containing two steel doors. Once I stepped inside, the door behind me closed, and thereafter the door in front of me opened. This setup was designed to prevent one from just running into the secured area, or perhaps piggybacking behind someone else. Now, I was officially in their lobby, which is where the exhibit resides!

The exhibit, titled The Economy in Action, talked about the history of money and how the Federal Reserve came to be, the duties of the Fed, and some background information into the Dallas district. I started off by watching a brief film, narrated by one of the top dogs of the Dallas district, welcoming us into the exhibit and describing the vast and unique economy that they have jurisdiction over. Dallas, the 11th district of 12 across the country, spans all of Texas and parts of New Mexico and Louisiana.

After the film, I started learning about the history of currency. Displays of various instruments of currency and visual depictions made it easy to comprehend how currency used to be something regulated by private financial institutions, and then moved to the control of a central bank. It also touched on the monetary system used by the Republic of Texas, and I got to see bills from that era. 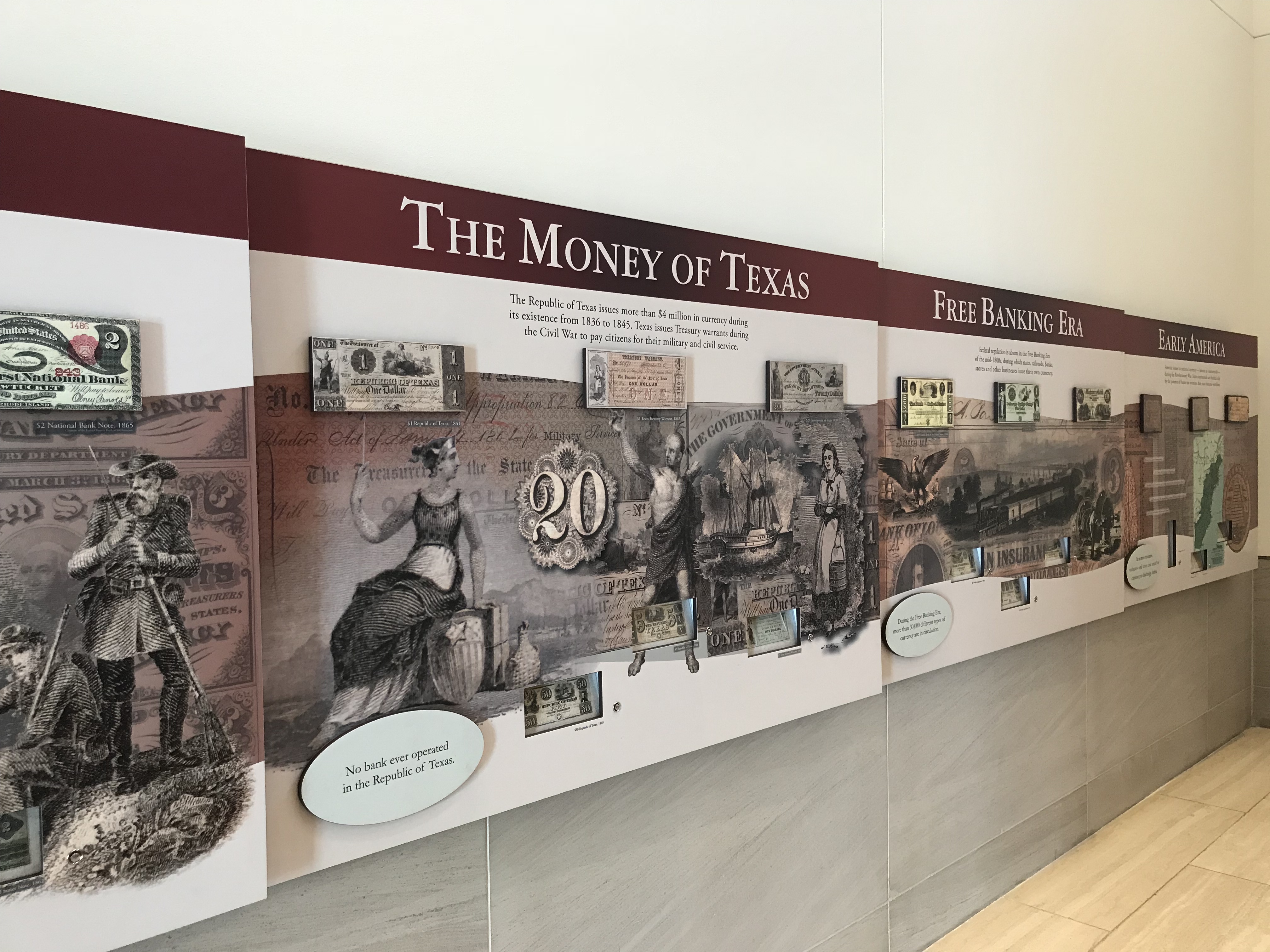 From there, I went into the section that talks about the duties of the Reserve. Upon exiting the exhibit at the end, I realized that I had toured it backwards..LOL! Oh well. Coming in, the first thing that drew my eye were these big carts that appeared to store money..lots of money.

Played the video and learned that these carts do indeed store money, the $ that comes from banks and the Bureau of Engraving and Printing for safekeeping until needed. In fact, armored trucks deliver and pick up cash here all the time. Upon arrival, they first go through a rigorous inspection process at the loading dock to make sure they are not carrying anything suspicious, before the process of on-loading/offloading those greenbacks begins. All money dropped off is counted before the Fed officially takes possession. They then immediately run all the bills thru a machine that checks to make sure the bill isn’t worn out or damaged, and that’s it’s not counterfeit. Should it be the former, they are shredded, while the fake stuff gets sent to the Secret Service for investigation.

As I moved on, a handgun in a display case caught my eye. Safety and security is such a paramount aspect of the work that is done here, that they have their own police force! The Federal Reserve Police, created in 2001, is a fully operational, armed police force that protects the building and its assets, inspects people and property, and responds to emergencies.

The next section talked about how the Federal Reserve works in both the American and global economy. The Fed stepped in during various financial meltdowns, natural disasters, and other occasions of need by loaning banks money and other behind the scenes processes so that the economic wheel keeps turning.

I then got to learn how the Federal Reserve hierarchical structure is laid out. The diagram and explanations did an outstanding job in educating someone from the general public with little to no knowledge of this aspect. Covered was what kind of role each committee and board plays, and how the members are appointed to said positions. 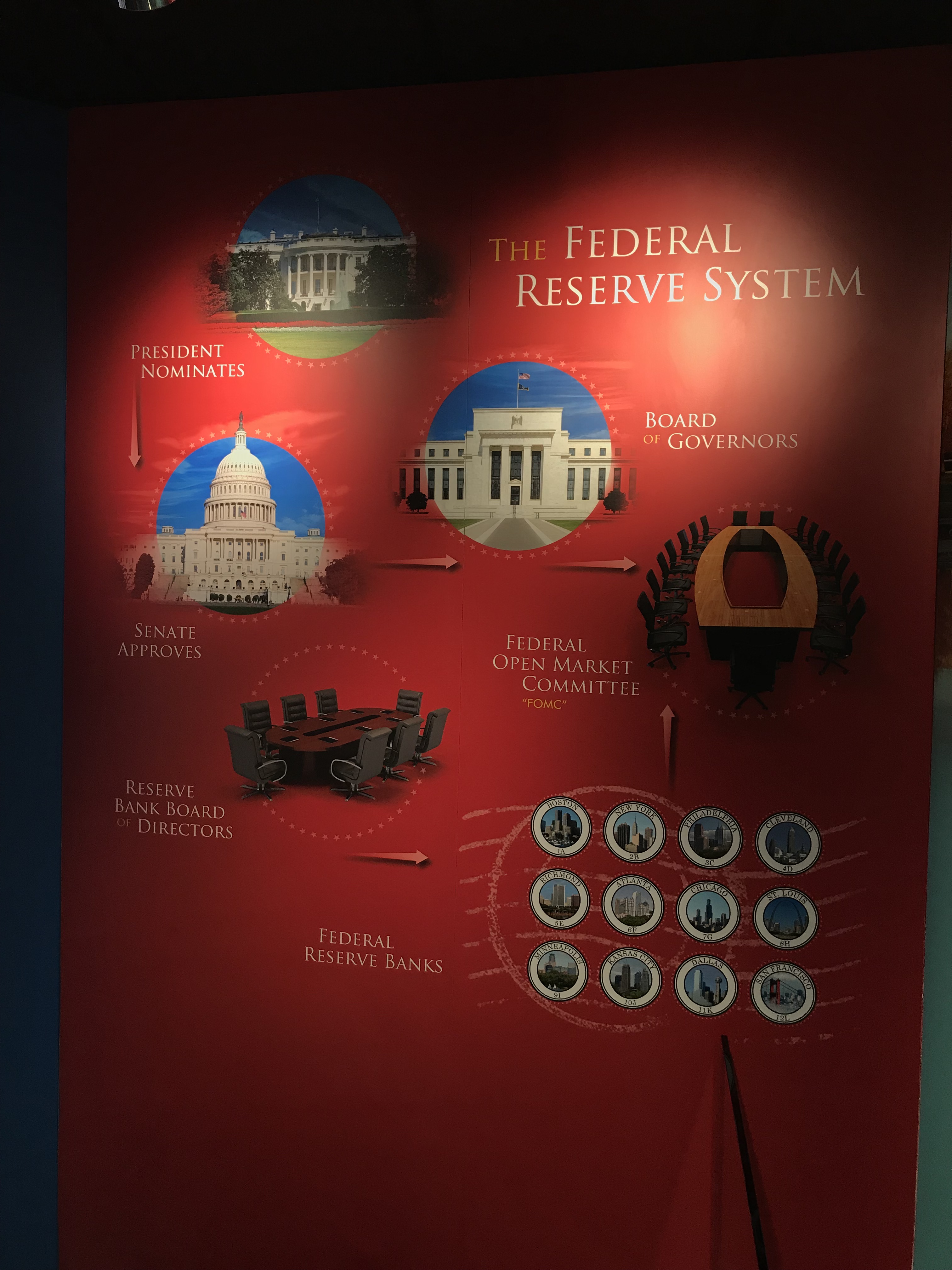 The last (really first) section talked about the founding of the Fed, dating back to the late 1790s. Fun fact: The current Federal Reserve isn’t the nation’s first central bank! The first was actually created by President George Washington in 1791, and lasted for only 20 years due to political opposition for its charter to be renewed by the Senate. Speaking of Washington, also covered were finances during the days of the original colonies and the subsequent American Revolution. Some very cool stuff if you are interested in the history that eventually led us to where we are today.

In conclusion, this was a very well put together exhibit that is worth the trip for anyone who is interested in economics, finance, or just how “the system” works in general. No matter what your opinion is of the feds, The Economy in Action really gives you their side of the story well, and is good for gaining some background information into this part of our government.  That being said, the content can be a bit dry at times, but still generally relevant and understandable for your average college-educated citizen.

Not to mention you get to see a very well constructed and designed building at an awesome price: free!

One thought on “Paying the Feds a Visit!”

Stephenville – Home of the Tarleton Texans

This Denton County Town is Named After Dish Network

Not Your Typical Junkyard – A Visit to an Aircraft Salvage Facility