City Government in a House: A Tour of Addison’s Town Hall

Summer – a time much enjoyed(and needed!) by all of us school employees. Although I work summer school this month, my workday ends right around noon. This leaves me a good chunk of the afternoon to explore and see new places. One of the things I’ve been doing as of late is clearing things off my “want to see but haven’t gotten around to see” list. Monday, I headed to a place in my own city that I pass by often but have never explored: the Addison Town Hall.

Now, you may be thinking to yourself “what is there to see in a town hall anyway?”. After all, the majority of city halls in the area are nothing more than modern-style office buildings housing different city departments. The average resident usually has little to no need or interest to visit one, except maybe to partake in a council meeting, or to get a business permit. However, Addison has it slightly different. Forget about the departments inside, just look at that design!

Touring the Addison Town Hall, which was originally a house built in the late 30s! Hands-down one of the most architecturally #grand city halls here in North Texas.

Of course, there is a story behind it. This building was originally a house. As old as it appears to be, it was actually built in 1939. J.B. McEntire, a prominent oil and gas attorney in the area, bought seventy acres of land, of which he used eight to built this house. Named the Stonegate Hall for a stone gate entrance on the main road, he and his wife lived in a place that was described by an architect as “the best example of how a house should be built.” Some of the notable features included foundation piers that extended deep into the solid rock, and six pillars that gave the house an antique look.

Unfortunately, Mr. McEntire passed away just two years after moving in. His wife lived here until 1967, after which the place became vacant. In the late 70s, the town expressed interest in the decaying house, and a thirty-year lease was signed. The rent? Just $1 a year. Eventually, the town purchased the home in 2000 for 1.3 million.

Today, the building is surrounded by businesses, and is actually located in the back of a restaurant square! Upon arriving, I was immediately greeted by a gorgeous chandelier and spiral staircase. This sight wasn’t exactly foreign to me, as I had been in here before once or twice as a young kid tagging along with Mom. Since Addison doesn’t have its own library, citizens had to stop by in order to get a card for the Dallas Public Library system. Mom would come here to get the application so that we could utilize their resources.

My tour guide was Karla Horton, with the City Manager’s Office. We started off on the first floor. Checking out the east wing first, she brought me to a room with a fireplace in it. Originally the dining room, it is now used for impromptu meetings by the city council.

Although this structure is historic, the technology in use inside is quite advanced. In this room, I came across teleconferencing devices, cameras, and other modern-day equipment. All these tools ensure that the employees and elected officials that work or convene here have what it takes to get the job done.

We then headed over to the west side. One of the first things Karla pointed out was a room with a staircase, now used as the office of the director of human resources.

Karla said that this stairwell was mainly used by servants back in the days of the McEntire family. Having this auxiliary means of going between floors for the housekeeping staff was paramount, so that they wouldn’t disturb the many parties that would go on in the front foyer.

Another place that I found to be pretty neat was the kitchen, located right down the hall. Considered super small by today’s standards, it serves as a staff break room. The interior design made me feel like I had been whisked back in time to much simpler days. I could imagine how much time the servants must have spent in here, preparing food of all kinds for the family.

Just then, Karla remembered me telling her that I was an Addison resident, and gave me a free book detailing the history of the town! #awesome 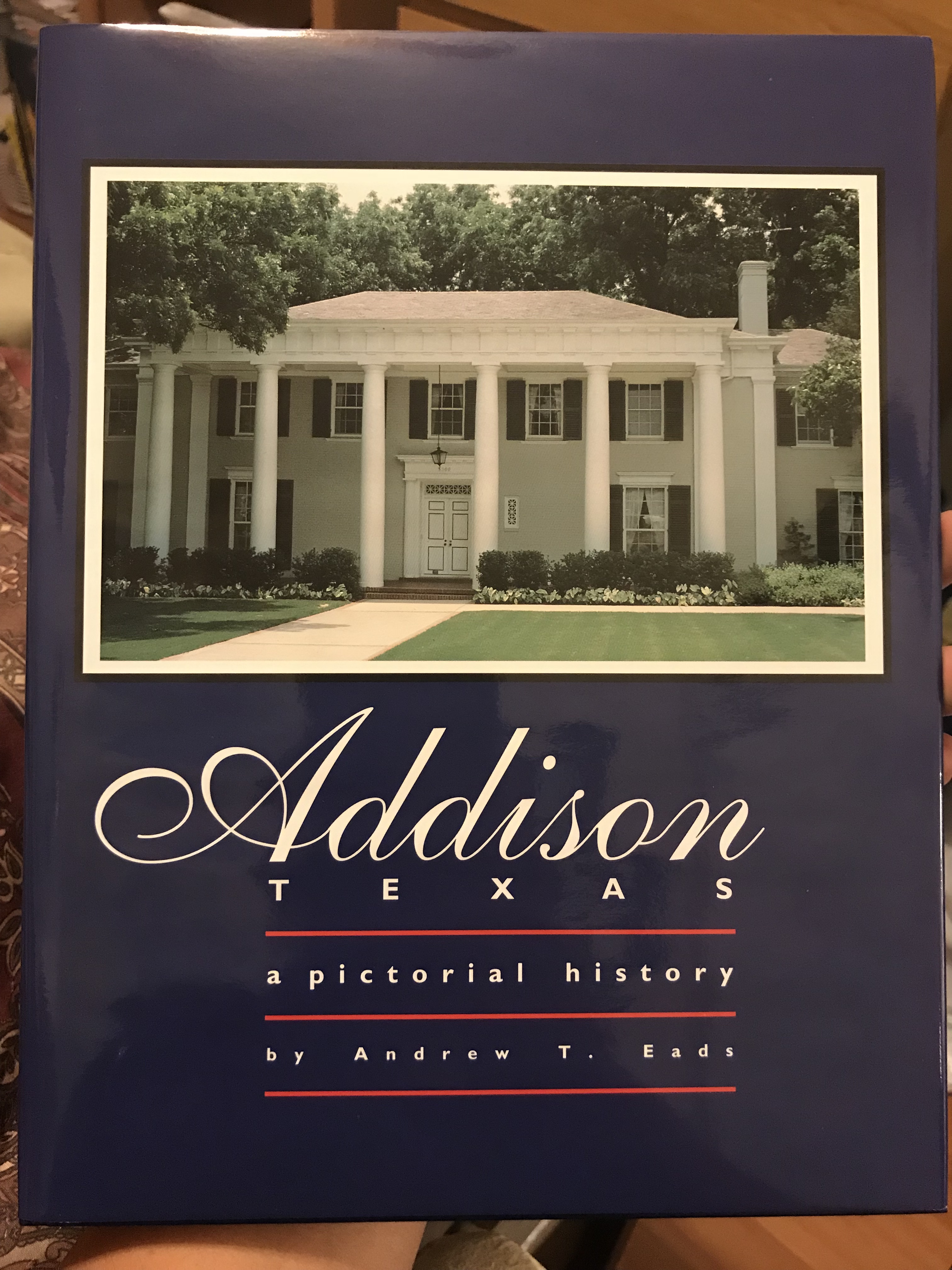 As the tour was going on, there were people working all around us in cubicles and various different rooms. It was peaceful, and felt like an overall good environment to spend eight hours of your day in. That is, unless you are a city council member. These top-level folks all have their own full-time endeavors outside of their elected positions, and only convene during meetings. Speaking of the city council, the council chambers was where we headed to next.

Having only seen this room on some of the town’s social media photos, the chambers were much smaller than I initially thought. The layout was super simple: several rows of seats for the audience, a lectern for citizens voicing their opinion, and of course places for the mayor and council members to sit.

Of course, I had to chill in the mayor’s seat and snag a photo.

What’s interesting is that this room used to be the garage! Housing three cars, there are almost no signs of its prior use except for a side door, which presumably went outside. If Karla hadn’t pointed it out to me, it would have never occurred that this was where the McEntire family’s cars were parked.

After a few minutes of looking at the many photos outside the chambers of the mayor and his staff over the years, we went back to the foyer and up the spiral staircase to see the second floor.

The first room we looked at was a conference room. Karla wasn’t sure what purpose this space had in its previous life, but nevertheless it had been preserved in its historic state pretty well, judging from the interior upkeep. Looking at the molding surrounding the ceiling, I could tell that this design was not modern or even semi-modern. 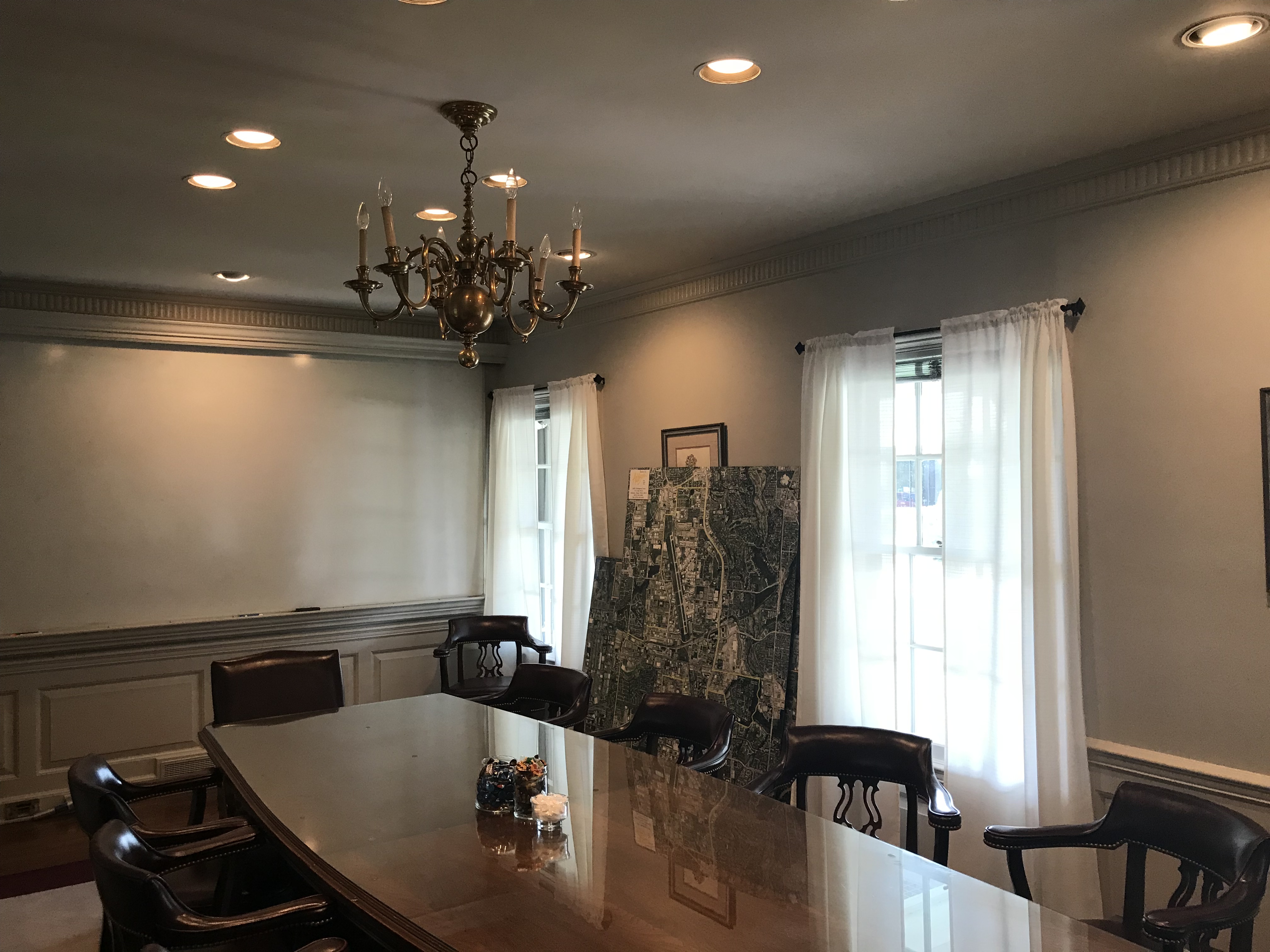 From there, we headed down the hallway to the workspace I wanted to see the most: the mayor’s office.

With views overlooking the creek and the green backyard space outside, Mayor Joe Chow has a peaceful and quiet place to run this town of just over 13,000. I marveled at how tidy his desk was, and how neat his office was in general. A china cabinet sat off to the side, displaying many of his artifacts. Karla mentioned that this area used to be the main bedroom. However, one typical feature wasn’t present – a bathroom. The closest one is actually down the hall.

On our way back downstairs, we passed by the City Secretary and the City Manager’s office, both rooms on the smaller side of the scale, but still fully usable spaces. On the other side of the second floor, there were other offices, but Karla indicated to me that they were in a conference, so we opted not to disturb them.

My tour concluded back where I entered, in the foyer. Although I have always been pretty fascinated with government, touring a city hall wasn’t something that really struck me as super interesting. That is, until the thought crossed my brain that the town I live in had a uniquely designed one that had yet to be seen. Combine a historic residence with a working city hall, topped off with an excellent tour guide, and it made for an enjoyable afternoon!

If you happen to be passing by on Belt Line Road and have a few minutes to spare, I would highly recommend stopping by to take a look. There are no gates or fences, so you are able to go around to the back of the house. With all that lush green scenery, it would be a great spot for photo shoots, or even just a nice place to take a stroll. Addison is mainly known for its expansive selection of hotels and restaurants, but its town hall is equally as awesome!

2 thoughts on “City Government in a House: A Tour of Addison’s Town Hall”