After finishing up seeing places like John Deere’s plant and the State Historical Museum of Iowa in Des Moines, I headed off for the college town of Ames, located about 38 miles to the north. Ames, with a population of over 60,000, is home to the largest university in the state – Iowa State University.

Founded in 1858, Iowa State has been around for 160 years! The school got its start as a land-grant university under the Morrill Act. Although ISU started off focusing on farming and agriculture experimentation, it grew over the years and today offers more than 100 undergraduate majors. Distinctions that were picked up along the way include being the birthplace of the first electronic digital computer, and playing a role in the Manhattan Project, which was responsible for the development of the atomic bomb. The school nickname, the Cyclones, has been around since 1895. After a high number of cyclones(what is now known as tornadoes) devastated Iowa that year, ISU’s football team scored a 36-0 win over Northwestern State. The press put two and two together, and Iowa State and the Cyclones have been associated ever since.

Arriving on campus, I parked in the east parking deck, which worked out well since no permit was needed in the evening time. From there, I began checking out the many buildings that make up this 1,813-acre campus. The first place I explored was the Gerdin Business Building, home to the Ivy College of Business.

One of the newer buildings on campus, the atmosphere and environment inside were pretty positive. It felt like a great place for learning and studying in pursuit of an accounting, finance, or other business degree. The interior setup reminded me a bit of my own school, UT Dallas.

As I always do when visiting a school, I went into a few of their classrooms and lecture halls. ISU has a pretty standard setup, although their lecture halls are rather big compared to UTD. I am not a fan of large class sizes since you get much less attention as a student, but that seems to be the case at the majority of public universities wherever you go.

The Memorial Union was my next stop, and is home to the school’s student union.

Inside, you can find everything from a bookstore packed with Cyclone merchandise, to a food court, and even a bowling alley! Although it was pretty dead when I went, I imagine this place gets pretty packed during the school year. Upon walking in, signs pointed the way to a hotel, so I went to ask one of the student workers about its whereabouts. It turned out there indeed was one, but it has since been closed. Nevertheless, I thought that was pretty cool as it was my first time seeing a hotel on university grounds.

Student life seems to be a big part of this university, and there certainly were many activities that could be done here at the Memorial Union. In addition, there were also quite a few areas where you could just sit somewhere comfortable and knock out homework.

Speaking of student life, Katie, an ISU alumna, had this to say about her time here: “I was lucky to spend four great years at Iowa State. Ames was a true college town – bustling during the school year, and quiet during the summer. The college and its students are the heartbeat of the town. I remember plenty of cold days walking to class in the snow – bundled up, fighting the wind, but somehow not really minding it. Iowa State is one of the Land Grant Universities, which means (among other things) there is lots of green space and the historic buildings are well maintained to reflect the periods in which they were built. I always tell people that it’s almost surprising to find such a beautiful place in the midst of Midwestern farmland. Weekend nights (starting Friday after class) were spent on Welch Avenue. Serious social scene!”

Katie mentioned something that I loved about here – all the green scenery. While walking thru campus, it felt like I was in a gigantic park. With plenty of trees and places to spread out, it gave off a very relaxing and calming feeling. 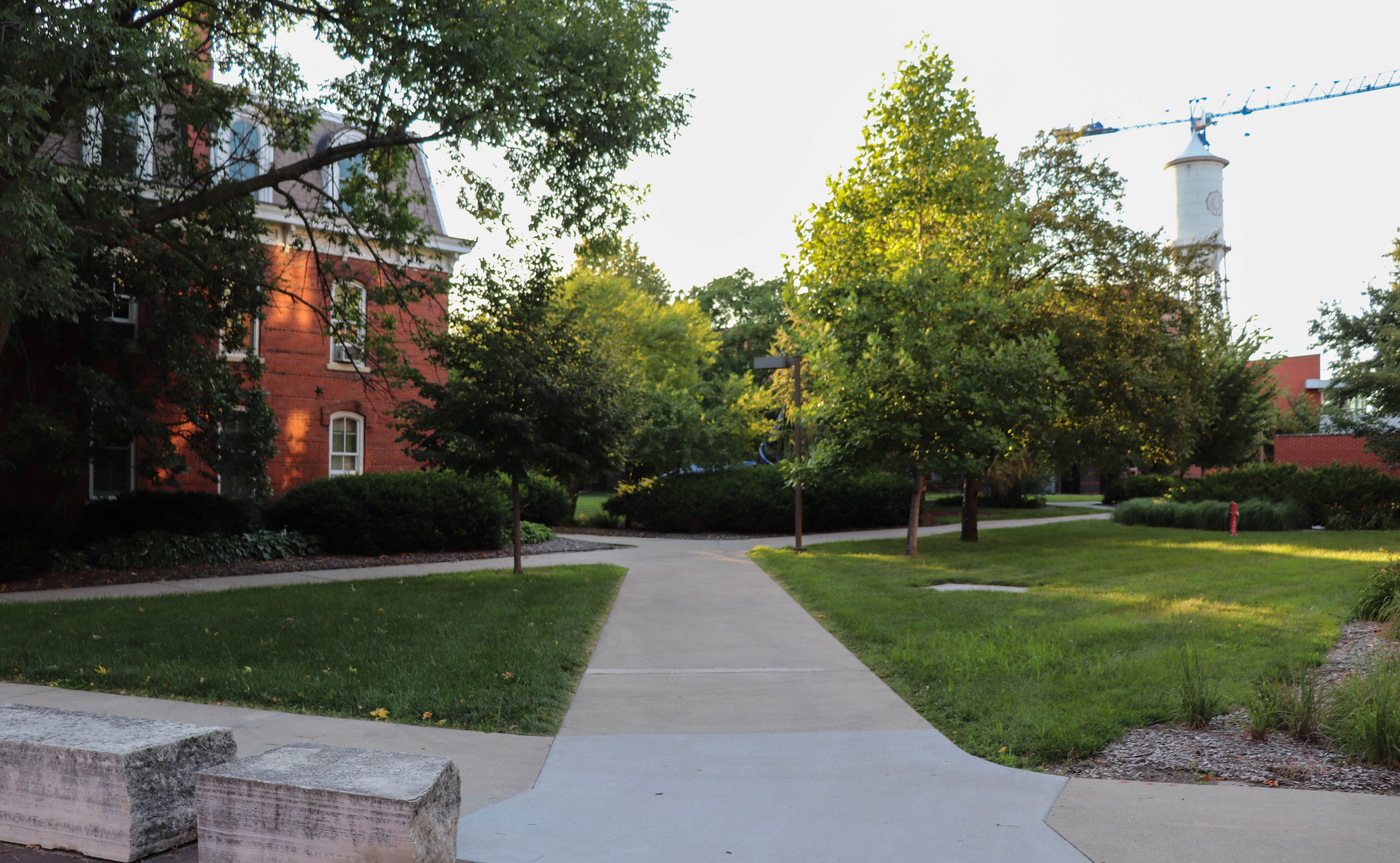 On the west side of campus, I checked out the engineering buildings. Engineering(along with agriculture) are some of the oldest departments in the university. In fact, the U.S. Department of Energy has their Ames Laboratory on campus, the only one of its kind!

The classrooms here were much more old-school, but it still felt like a great environment for learning.

Before heading to check out the athletic complex, I swung by to see the Parks Library. This modern learning commons didn’t have many people inside at the time, but I can almost say for certain during the school year it’s a busy place. I didn’t go upstairs, but I’m sure that there were plentiful amounts of books and other information contained here for pretty much any major on campus.

Since it was a bit too far to walk, I decided to drive to Jack Trice Stadium, home of the Iowa State Cyclones football team. Located on the far southeast side of campus, Jack Trice opened in 1975 and boasts a seating capacity of 61,500. It’s not as big as Memorial Stadium at the University of Nebraska, but looked to be very well-designed.

Although Katie lives in Texas now, she still cheers on the Cyclones, and said of a typical game day here: “During football season, Saturdays were spent at Jack Trice. Tailgaters from across the state would show up hours in advance and set up camp – tents, grills, radios…you name it! The tailgates went on for blocks and blocks; young and old celebrating their beloved Cyclones.” This didn’t surprise me, especially being that ISU is part of the Big 12 Conference. For those stopping by here, you can grab free posters and game schedules at the Jacobson Athletic Building, which is connected to the stadium.

Wrapping up my visit to ISU, I have to say that based on what I saw, I left with a very good impression of the Cyclone Nation. The combination of buildings, green scenery, athletics and really just the environment in general made me think that Iowa State University would be an outstanding place to get your education. That being said, if you aren’t a fan of the cold weather, you probably won’t like it here very much. The winters in Iowa can be frigid and then some. Climate aside though, this place gets two thumbs up from me. Did I mention for some odd reason, I really liked their school logo too?