Lubbock – a city that is known as the home of Texas Tech University, but also one of the main population centers in rural West Texas. After a great day spent exploring Amarillo, the family and I headed for “Hub City”, located two hours away. This nickname originated from the fact that Lubbock is the economic hub of the South Plains region. This wouldn’t be my first time in town- flying back home from Roswell, New Mexico last year, I stopped at the Lubbock airport for fuel and a quick lunch. Seeing that Texas Tech was one of the few well-known universities in the state that I hadn’t visited, it was an easy decision to swing by to see the school and city.

Leaving Amarillo, we took Interstate 27, which stretches from Amarillo to Lubbock. On the way there, we passed by towns like Canyon, Happy, and Plainview. Canyon is home to West Texas A&M, a small university that focuses pretty heavily on agricultural and equestrian studies.

Happy isn’t just some name you’ve heard in a movie – it’s an actual town! With a population of just 667, it is nothing more than a tiny community in the dusty Panhandle. Many of the roads weren’t well-paved, and the downtown area was little more than a few buildings.

With light traffic conditions, we entered Lubbock city limits ahead of schedule. After lunch, we began our tour of Hub City, starting with the most well-known place in town – Texas Tech University.

Established in 1925, the school was originally established as Texas Technological College. The state legislature formally changed the name to Texas Tech in ’69. Today, it is home to over 36,000 students and holds several distinctions including being the only campus in the state to have a university, law school, and medical school. Tech is also very well-known in the athletics department, with its football team competing in the Big 12 and holding status as a Division 1 school. 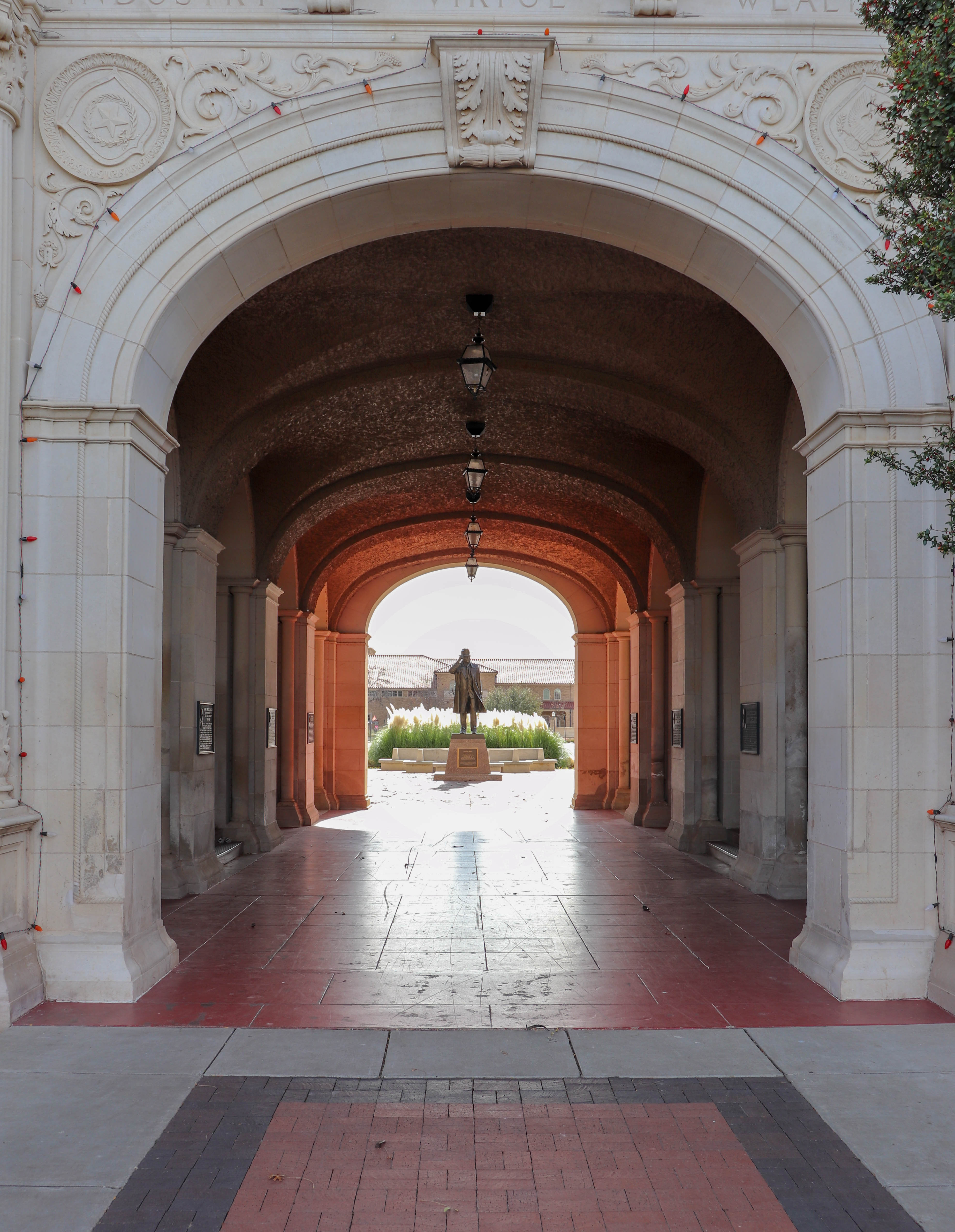 Although there wasn’t as much green space as that of Iowa State University, the exterior layout still was well-designed and easy to navigate.

Since it was Thanksgiving weekend, most of the buildings were closed. However, we did go inside the library, which was open.

Inside, it was pretty typical, with all the features one would expect for a university of this size. A coffee bar was located in the lobby area, along with computers and meeting areas on the first floor. Smart boards were installed by the little meeting pods, allowing students to collaborate using advanced technology.

The upstairs area was all books. Combined, the Texas Tech library has over 1.7 million volumes in its collection. 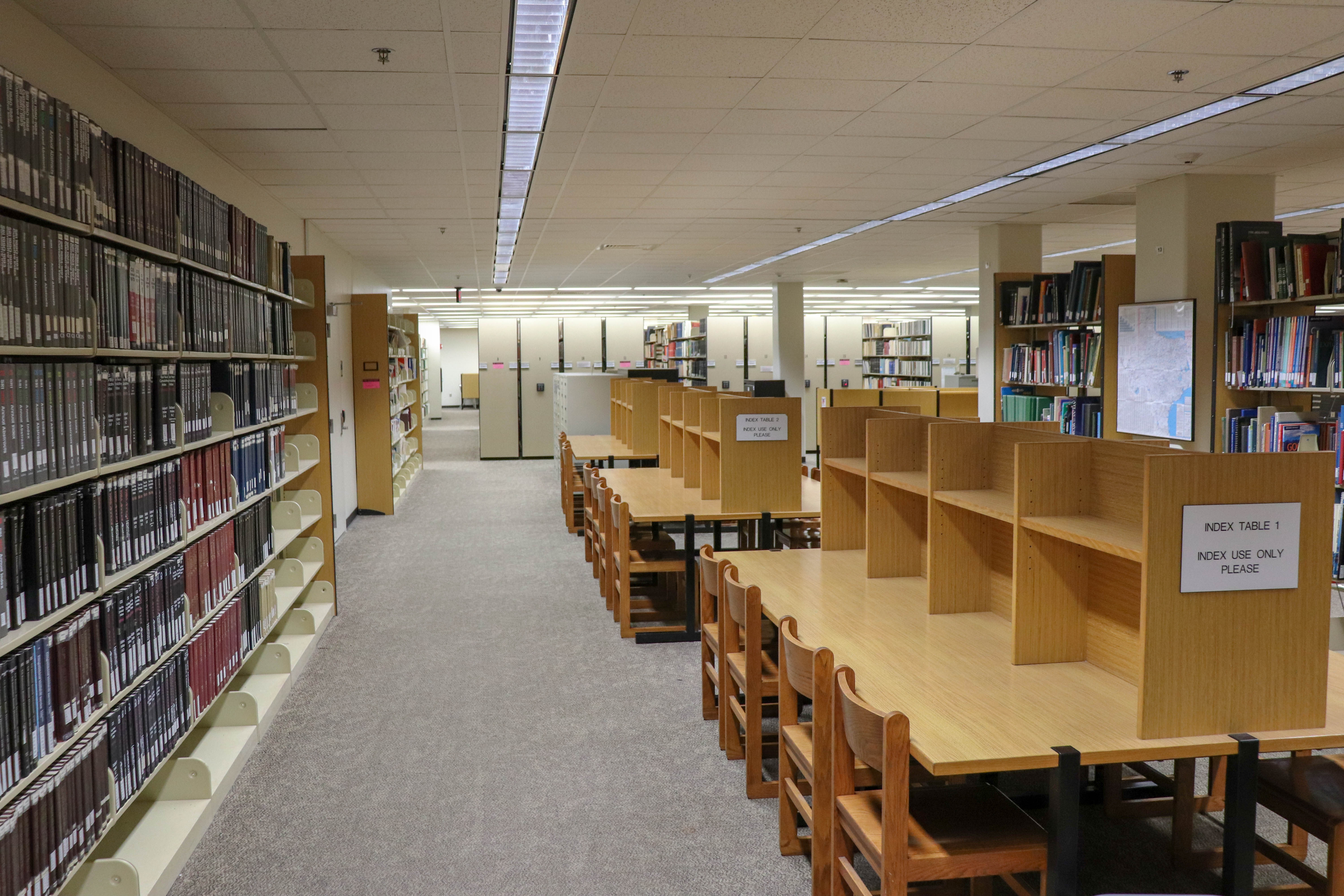 Leaving the library, I came across this pretty neat statue of a walking “book man”.

The last place we visited here was the Rawls College of Business, located all the way on the other side of campus.

The doors were locked, but peering inside the building looked pretty modern. This bear and bull piece of public art, representing the stock market with its lines indicative of the ups and downs was unique!

All in all, I found this visit to Texas Tech to be pretty relaxing. It was neat seeing the campus of a school often discussed in collegiate football and talked about by friends who went here. Leaving Red Raider Country, it was off to our next stop, Prairie Dog Town – perhaps Lubbock’s most unique destination.

A part of the city-owned Mackenzie Park, Prairie Dog Town is an enclosed area where prairie dogs live and get spoiled by visitors dropping food. It was started in 1935 by a guy name K.N. Clapp, after being concerned about the possible extinction of this species due to the government’s poisoning program. With two pairs of prairie dogs as its first inhabitants, this habitat flourished. Upon arriving, there were quite a few people, most with bags of carrots in hand.

Being that we didn’t prepare any food, we headed to the local supermarket and was back before long with several bags of baby carrots. Tossing them to these little creatures, they caught and ate the incoming supply of fresh food around half of the time. Other times, they seemed to be oblivious to the fact that a carrot had landed right next to them(or perhaps they just didn’t care).

Signs here give the visitor some information about prairie dogs and their burrows. These creatures are pretty ingenious as I learned from this diagram- their underground habitat includes emergency exits, various rooms, and a food storage area!

Birds were swooping in and walking around amongst the prairie dogs, but they didn’t seem to mind or have any sort of conflict at all.

Between feeding and just observing these creatures in their natural habitat, we spent close to an hour here. Prairie Dog Town is a place I definitely recommend for a fun, family-friendly outdoor activity here in Lubbock. Time slipped on us, but we still headed for the American Wind Power Museum.

Due to the museum getting ready to close for the day, we opted not to see the exhibits inside, but we did walk around Lineberry Windmill Park, located outside. Many different windmills were represented here, including this Vestas V47 wind turbine. This thing is humongous!

Rising 164 feet into the West Texas sky, this wind turbine generates 660kW of power, enough to power the museum. Excess energy is sold to the local power grid. These modern-day windmills can be seen all over this region, however, it is here that you can get up close and personal with this masterpiece of technology.

Leaving the Wind Power Museum, we did a driving tour of downtown. The whole area was deserted; with all the Texas Tech folks gone there just wasn’t any livelihood there. At the Lubbock Preston Smith International Airport though, our last stop, it was anything but deserted.  The terminal was pretty crowded, full of folks mostly coming back into town. While their terminal isn’t very modern, it was well-structured(at least from the non-secure side) with rental car counters located in the building; negating the need to hop on a shuttle.

In sum, it was a nice half-day spent seeing Hub City and what makes up the land of the Red Raiders! Being that this school revolves around the university so much, it might be worth stopping back in on game day, or at least when the semester is in session. I’d also like to see the exhibits that make up the American Wind Power Museum. But for now, it’s one more Texas city visited!

Amarillo – The Route 66 City of Texas

A Visit to Abilene Christian University